Top six Halloween tricks and treats to avoid for dogs

Halloween is a fun holiday for humans, but it can be dangerous for our four-legged friends. Although there are a variety of tricks and treats that sent 46% of pet owners surveyed to an emergency clinic with their pups, chocolate is by far the most common hazard to dogs on Halloween. Nearly 80% of dogs who ingested a potentially hazardous substance on Halloween consumed chocolate, while 25% of dogs went to the vet for eating decorations, like glowsticks or parts of costumes. 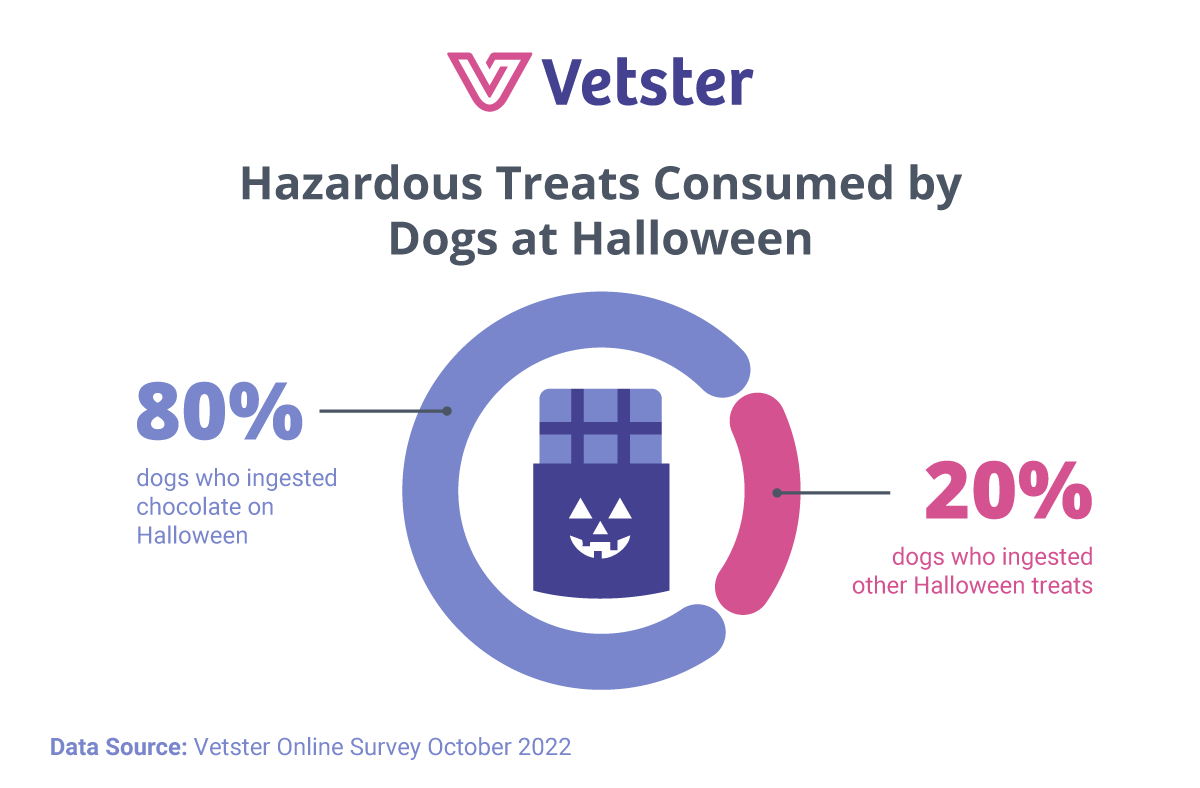 Rushing your dog to the emergency vet isn’t how you should spend this holiday. There are certain tricks and treats that your dog should avoid to stay safe on Halloween. These are some of the most common Halloween hazards to dogs.

The dangers of chocolate are well-known among most pet owners, but it is still one of the most common toxic treats that dogs consume around Halloween. Your dog’s reaction to chocolate will vary depending on both the amount of chocolate consumed, as well as the type of chocolate. Dark chocolate is generally the most dangerous variety for dogs as it is the most concentrated source of caffeine and theobromine, the two toxic ingredients in chocolate. Low doses of chocolate don’t cause any problems, but larger doses can lead to symptoms that range from a mild upset stomach to fatal cardiac and neurologic symptoms. The common symptoms include:

Sugar-free gum and candies may be a sweet treat for health-conscious humans, but the xylitol often present in these substances can be dangerous for dogs. The amount of xylitol consumed will affect the severity of your dog’s reaction, but this information is usually not readily available on product packaging. Most symptoms your dog may experience from xylitol ingestion arise from either a sudden drop in blood sugar or a rare form of liver failure. Here are some other common symptoms:

While you may think of raisins as a healthy alternative to Halloween candy, they can be fatally toxic for your pet and should be kept out of reach. Raisins may be present by themselves as a treat on Halloween, or combined with other ingredients in cookies, trail mix, or candy that often also contains chocolate. Ingestion of raisins by dogs can lead to lethal kidney damage, but not all dogs are sensitive. There is no way to predict which dogs will have a reaction, so it’s important to avoid exposing your dog to any amount of raisins.

The wrappers and bags that contain candy can be just as dangerous to your pup. Whether a wrapper is still on the candy, or it has been discarded, it presents a hazard to your dog. They may be interested in the crinkly texture of plastic or foil, or in the residue of candy left behind. Candy wrapper materials including plastic, foils, bags, and lollipop sticks should be discarded in a secure bin that your dog cannot access. Dogs commonly consume large numbers of wrappers when they find entire bags of fun-sized candies and eat the whole thing, wrappers and all. Eating large amounts of wrappers can lead to:

Some non-food items, like costumes and accessories, can also be hazardous to dogs if ingested or used improperly. Keep in mind that costumes for dogs, including decorated harnesses, leashes, or collars, are often meant to be used only temporarily under supervision and are not intended for normal function year-round. Often Halloween costumes and accessories, whether intended for an animal or human, can have small parts that are easily removable and tempting for a curious pup to chew off and swallow. Glow sticks are an example of a popular accessory, but they should not be placed on pets or within their reach. The liquid inside glow sticks is bitter and unpleasant and will cause a brief but intense reaction to any pet who bites through, but, fortunately, it is not toxic. The larger hazard with glow sticks is the plastic casing itself.  Like any other non-food item that could be easily swallowed, the risks posed include:

6. Getting hit by a car and other injuries

Even though it’s a lot of fun, Halloween and its associated rituals like trick-or-treating also create a lot of chaos. Doors are opened and closed frequently and lots of people, especially children, are coming and going. There’s also a lot of excitement out on the sidewalks and in the streets, and traffic can get crazy too. As such, trick-or-treat night is often busy at the animal ER because dogs escape and end up in the streets. Getting hit by a car is an all-too-common Halloween tragedy that’s best avoided by keeping your dog secure and away from the door.

When to call a vet

If you realize your dog has consumed a toxic substance, such as chocolate, you should call poison control or an emergency vet right away so they can receive treatment as soon as possible. Prompt treatment is one of the most important factors in achieving a good outcome when your dog ingests a toxic substance.  It is risky to attempt to induce vomiting at home, so this should only be done when directed by a veterinary professional. Time is of the essence immediately following the ingestion of a potential toxin, and an emergency vet can often administer or recommend early treatments to prevent your dog from fully absorbing the toxins.They can also monitor your dog’s vital signs and administer treatment to address cardiac and gastrointestinal symptoms. Don’t overlook symptoms of toxicity. A dog who has consumed chocolate or another toxic substance may require IV fluid and medical treatment for several days.

Consumption of non-food items may also require treatment from a vet. In some cases small non-food items may pass through your dog naturally or be spontaneously vomited, while in others may require surgical removal. Keep in mind that your dog may end up with an upset stomach from overindulging in treats on Halloween even when they are not toxic. For non-emergency situations, questions, or concerns, you can save a trip to the vet clinic by booking a virtual vet appointment. 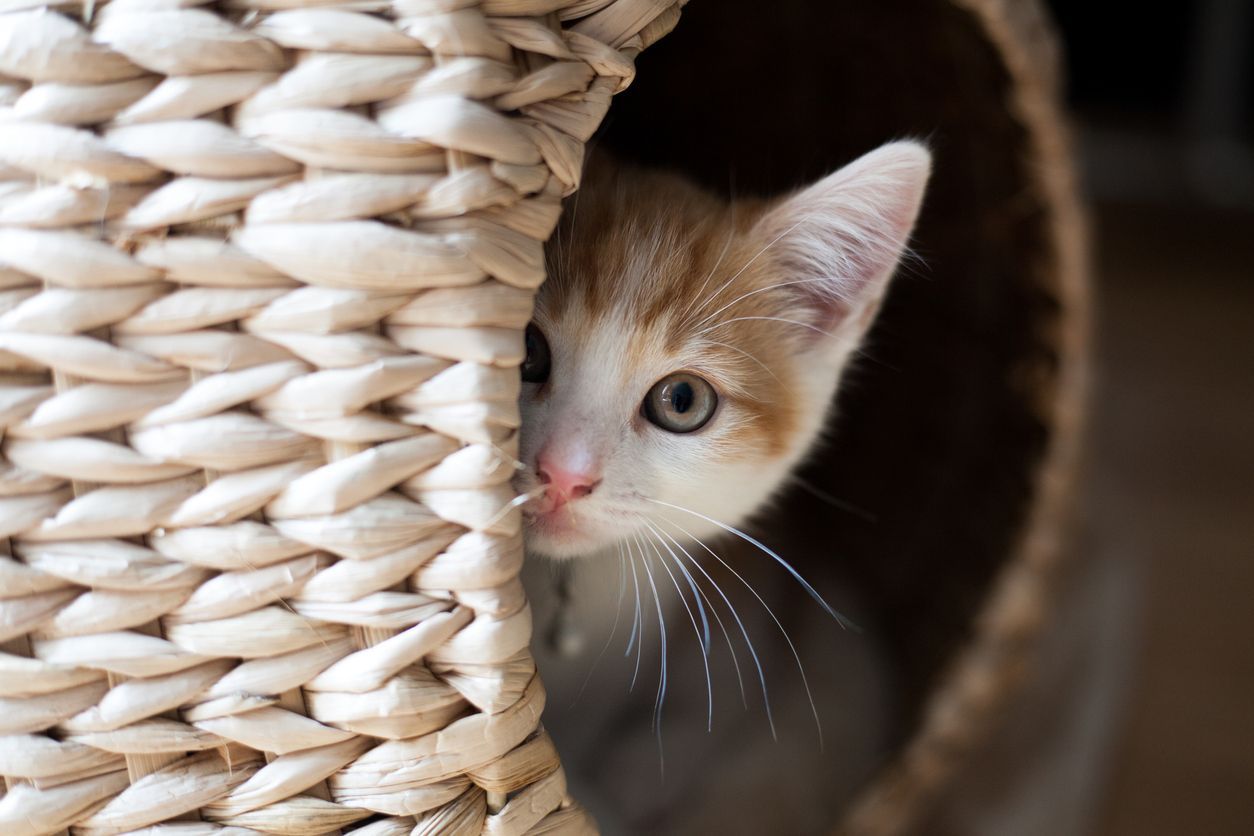 Is your cat stressed? What we can do as pet parents

Stress is common in house cats, but is shown in subtle ways. It’s also difficult for us as humans to understand what our cats find stressful... 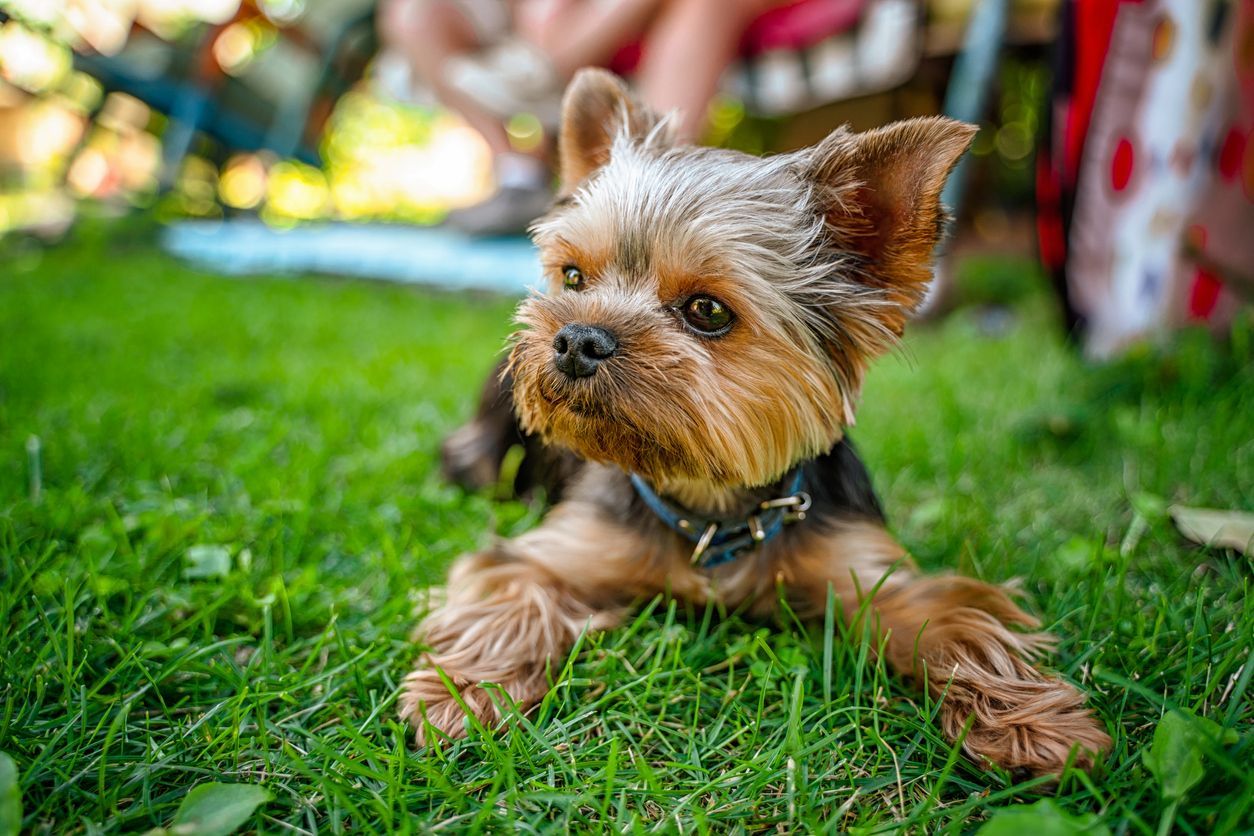 Microchips are an excellent way to facilitate your pet's safe return if they escape or get lost. Pets with microchips can be scanned at animal shelters and vet clinics... 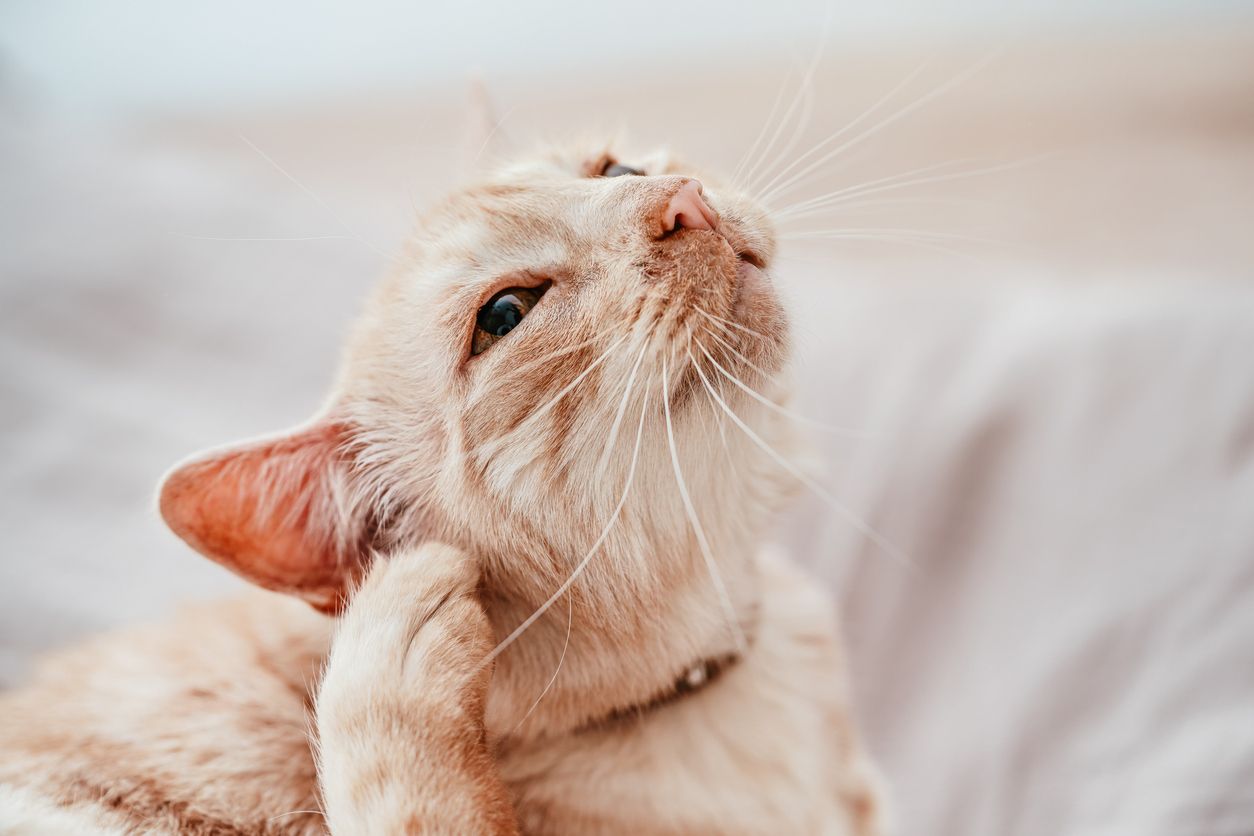 What to know about ear mites in cats

Ear mites are highly contagious for cats as well as dogs. This external parasite looks similar to a tick but is so small it’s almost impossible to see with the naked eye... 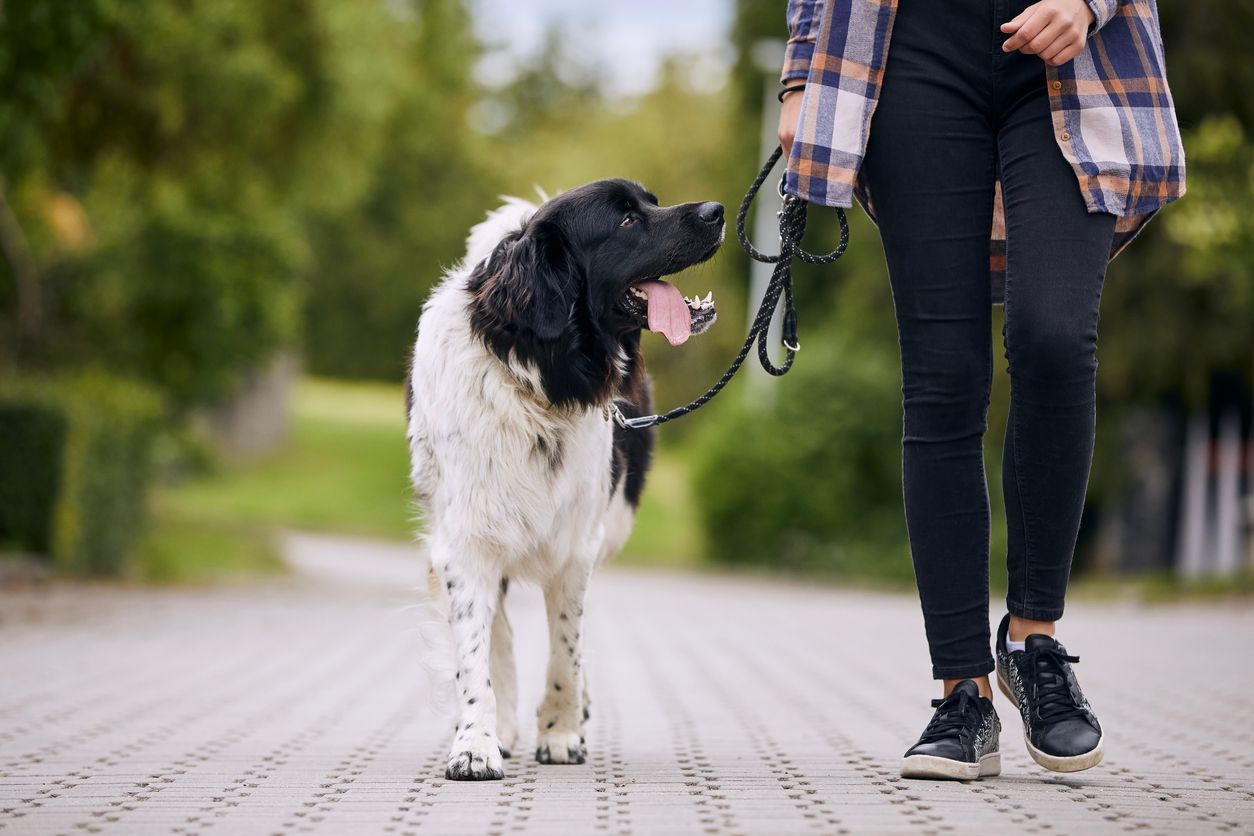 Leash reactivity in dogs: How to manage and prevent it

Leash reactivity in dogs is a common complaint among pet owners during walks. Leash-reactive behavior is more than just negative or aggressive behavior in response to other dogs, cars, cyclists, or people while on a leash...